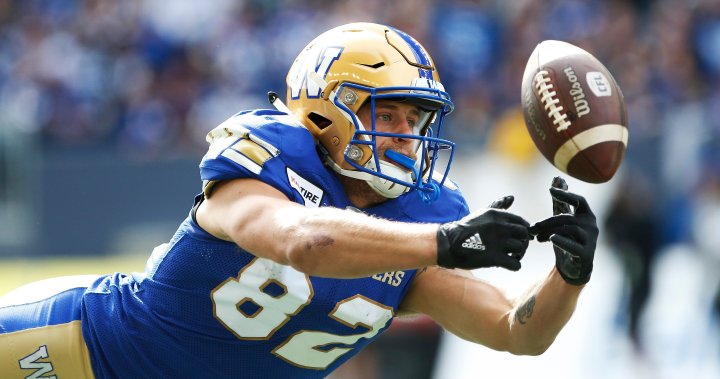 With just a week left until the start of CFL free agency, the Winnipeg Blue Bombers re-signed a pair of Canadian starters.

The Bombers announced the signings of receiver Drew Wolitarsky and offensive lineman Michael Couture on Monday.

Wolitarsky signed a two-year contract to stay on board, while Couture re-upped on a one-year agreement.

The 26-year-old Wolitarsky has played the last four seasons in the blue and gold after being picked up in the 2017 Supplemental Draft. He appeared in every game last year and finished the regular season with 32 catches for 386 yards and one touchdown.

Wolitarsky and Nic Demski are both signed for 2022, but the Bombers still have six receivers set to test free agency next week with Kenny Lawler, Darvin Adams, and Rasheed Bailey among the players who still need a new contract.

With the signing of Couture, Bombers General Manager Kyle Walters kept all his starting offensive linemen from testing the free agent market.

The 27-year-old Couture will enter his sixth season with the club after being selected in the second round of the 2016 CFL Draft. He didn’t miss a contest last season, with Couture starting every game at centre in getting named a CFLPA All-Star.

The Bombers have now re-signed four of their five starting offensive linemen from their Grey Cup championship winning season. Only Drew Desjarlais departed after signing a new deal with the NFL’s New England Patriots last week following his released by the Bombers.