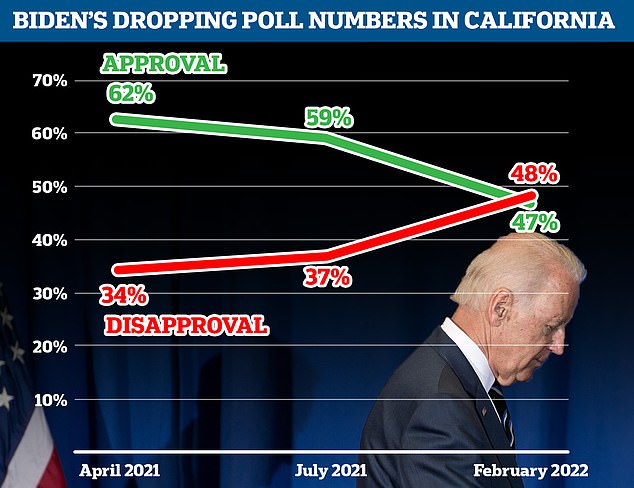 Joe Biden‘s poll numbers are continuing to plummet even in the super-Blue state of California, with more voters disapproving than approving of his current job performance.

A new survey by UC Berkeley Institute of Governmental Studies showed the current administration is quickly losing support, with approval of Kamala Harris and California’s two Democrat senators also dwindling in the polls.

It is another dire signal for the White House and the Democrats that they could be subjected to a Republican bloodbath in the midterm elections.

Figures in the party are trying to rapidly re-shape their message to address economic issues like inflation after Bernie Sanders warned last week: ‘We aren’t caring to the needs of the American people’.

The poll of 8,937 registered voters in the Golden State showed 48 per cent currently disapprove of Biden’s presidency, compared to 47 per cent who approved.

The numbers have dropped significantly since a similar poll was carried out in California in April 2021, when Biden held a 62 per cent approval rating and 34 per cent disapproval.

By July 2021, there were signs his popularity was starting to wane as his ratings slipped to 59 per cent approval and 37 per cent disapproval.

Joe Biden’s poll numbers are continuing to plummet even in the Blue state of California, with more voters disapproving than approving of his current job performance

But the latest poll shows a huge turnaround with more voters unimpressed with his job performance than are supportive of the president.

The results mirror a nationwide trend of sinking popularity for the Biden administration, with an average of recent national polls indicating last week his approval rating has dipped below 40 per cent for the first time in office.

His mishandling of the Covid pandemic and its accompanying mask and vaccine mandates, rising inflation, Critical Race Theory in schools and the US-Mexico border crisis have all contributed to his flagging popularity.

In the recent California poll, Biden commanded support of only 72 per cent of registered Democrats and six per cent of Republicans, showing his bid to bridge the partisan divide is failing to connect with voters.

The findings also show that the age group most likely to be disaffected with the current president are the 18 to 29-year-olds, with only 34 per cent of them approving of his job compared to 53 per cent who disapprove.

To add to Biden’s woes, Kamala Harris, who served as a senator and attorney general for California, has even worse ratings in her home state.

Kamala Harris, who served as a senator and attorney general for California, has even worse ratings in her home state

The vice president commands only 38 per cent approval among her voters, with 46 per cent disapproving of her job and 16 per cent offering no opinion.

The numbers are a similarly dramatic job from April 2021 when she held 53 per cent support and only 33 per cent disapproval.

Similarly, senator Dianne Feinstein, who has served the state since 1992, has dropped to her lowest ever approval ratings.

Only 30 per cent of California voters gave her a positive rating, compared to 49 per cent who disapprove of her job performance.

Mark DiCamillo, director of the poll, said of Harris and Feinstein: ‘I was amazed at the disaffection for both of the women.’

Feinstein, now aged 88, is even more unpopular among women voters.

She has repeatedly had to bat away retirement rumors and has rankled voters by not being tough enough on Donald Trump’s Supreme Court nominees in her role as the top Democrat on the judiciary committee.

She has also struggled to connect with the growing progressive flank of the Democrat party.

Fellow senator Alex Padilla has failed to make much of an impression with voters, with 40 per cent holding no opinion, more than the 34 per cent approval and 26 per cent disapproval ratings he scored.

Overall, political apathy is clearly rife in California, with only 20 per cent of voters approving of the performance of Congress as a whole, compared to 72 per cent disapproval.

Real Check Politics took an average of the most recent national surveys – 304 polls taken from January 2020 to this month – which measured Biden’s standing. Their cumulative poll put the President’s approval rating at 39 per cent and his disapproval at 54 per cent

Biden’s ratings across the country are falling, with a vast majority of American voters frustrated with rising inflation, the continuing Covid-19 pandemic – and the resultant vaccine and mask mandates – as well as unrest at the border with Mexico.

After holding above 50 per cent approval ratings nationwide in his first months in office, Biden’s popularity has dropped since August last year as Covid deaths surged across the country and the US-backed Afghan government collapsed, and the subsequent botched withdrawal.

Real Check Politics took an average of the most recent national surveys – 304 polls taken from January 2020 to this month – which measured Biden’s standing.

Their cumulative poll put the President’s approval rating at 39 per cent and his disapproval at 54 per cent.

Democrats are increasingly worried that dissatisfaction with Biden’s presidency could cost them their majority in Congress in the November 8 elections.

If Republicans take control of either the US House of Representatives or Senate, Biden’s legislative agenda could be doomed and he would become a lame duck president.

Democrats are warning their OWN that voters in swing districts think the party is ‘preachy’, ‘judgmental’ and ‘focused on culture wars’

The Democratic Congressional Campaign Committee (DCCC) is warning their members that in order to increase standing going into the 2022 midterms, Democratic candidates need to respond more fervently to Republican attacks, documents obtained by Politico detail.

A poll of generic ballots of swing districts from late January commissioned by the DCCC shows Republicans ahead of Democrats in battleground districts by 4 percentage points on average.

But the same polling shows that Democrats could regain a lot of that ground if they offer strong rebuttals to political hits.

Republicans’ lead jumps to a whopping 14 points if Democrats completely ignore their attacks, party operatives warned in the report. But when voters heard a response from Democrats to these attacks, the GOP’s advantage narrowed down to 6 points.

The report suggests to Democrats that when faced with attacks that they support defunding police, they should respond by reiterating their support for law enforcement, Politico notes.

When facing an attack on the illegal immigration crisis, the documents tell Democrats to deny that they support ‘open border or amnesty’ and instead talk about their efforts to keep the southern border safe.

A new poll reveals that only four states have a higher approval rating for Joe Biden than disapproval – Hawaii, Vermont, Massachusetts and Maryland. None of those states, however, reach the 50% approval threshold