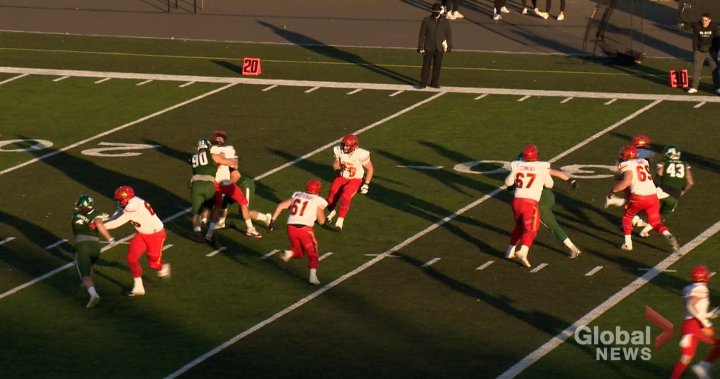 It may be an opposing teams building, but neither Nathan Cherry nor Riley Pickett are strangers to playing at Mosaic Stadium.

The BC Lions rookie defensive linemen, selected third and 41st overall, respectively, have played at Mosaic as visitors many times — Pickett with the Saskatoon Hilltops and both as members of the University of Saskatchewan Huskies.

The building, which is one of the most hostile in the league, can be menacing for young players as they learn to ply their trade in the Canadian Football League.

But for Pickett and Cherry, it was a long-awaited homecoming.

“It’s a familiar setting,” Cherry explained. “I was talking to (Riley) Pickett and a couple of the other guys; we’re used to winning there so it was good to keep the tradition alive of winning at Mosaic.

“It was a dream come true, just flashbacks to being a child, just watching every CFL game. You never know what’s going to happen until it happens, but just thinking back to when I was a kid, I’d be pretty proud of myself.”

“I was just so excited to get out there the whole time, I went out there in pre-game and just walked around and I was like, ‘This is crazy, we’re out here,’” Pickett added. “Even last year I was here watching games and now I’m going to be playing in one. So, it was awesome, I just grabbed the moment and ran with it.

“It was my best game of the season so far, so I hope to keep building off that and keep getting better and better.”

The two Lions rookies had plenty of friends and family in the crowd for the Friday night tilt, the two visiting players doing everything in their power to convert their supporters from Rider Nation’s green and white to Lions orange.

“Most of (my family) said they were wearing Riders (gear) in the first half, but once we started winning they all took off their jerseys and threw on the BC Lions stuff,” Cherry chuckled. “So, I think slowly we’re starting to convert some fans in Saskatchewan.”

“I had a lot of friends and family of there so it was great to get the win in front of all of them,” Pickett said. “They were all wearing orange, by the way — none of them were wearing green. I’ve definitely been converting my fair share of Lions fans as well.”

As much as Cherry was fired up by the roar of the crowd in his first pro game at Mosaic, it was a different sound in the fourth quarter that’s most memorable to him.

“To be able to hear them in the first half being so loud and then in the fourth quarter it’s as quiet as a funeral, it was perfect,” he said.

Despite the impressive numbers, both admit that the jump to pro has taken their games to the next level.

“It’s a learning curve, alright,” Cherry said. “Everyone’s bigger, everyone’s faster, everyone’s smarter. It’s a lifestyle here; it’s what people do for a living here. They’re feed(ing) their families. So, you’ve got to bring your all every day to practices, to games — you’ve got to be yourself, your best self.

“Every week it feels like I’m learning something, just getting a little bit better everyday. It’s a process but it’s paying off, it’s turning me into the best player I can be.”

“Every day we just come to work with our lunch kit and our hard hats, watch film, work hard at practice and do your job for the guy next to you,” Pickett added.

“The speed and strength of the players really progresses with every jump; that’s no different from USports to this level, as well as the amount of film study and play installs that we’ve been doing.  I’ve been loving it so far, that’s the dream and to say that you (play football) for work, you never work a day in your life if you love what you do.”

As much adjusting has come with rising the ranks to the top league in the country, many things have stayed the same — including the camaraderie between both Pickett and Cherry as well as another Huskies grad, offensive lineman Noah Zerr.

“It’s just like the same thing for the past four years: I’m butting heads with Noah out there, I’m cheering Nathan when he’s out there, nothing really changes except the jersey colour,” Pickett said.

“(As rookies) we’re fairly quiet (in the locker room),” Cherry added. “But between the three of us were still giving it to each other just like we’re still back in Saskatchewan, it’s awesome having each other here.”

As for what hot spots and restaurants have been alluring to the young linemen, that hasn’t changed much either.

“Our go-to (spots) are Save on Foods and Superstore,” Pickett laughed. “We just meal prep our own food all the time just like we did at home. We haven’t really gone out to eat, we’re just trying to maintain that physique.”