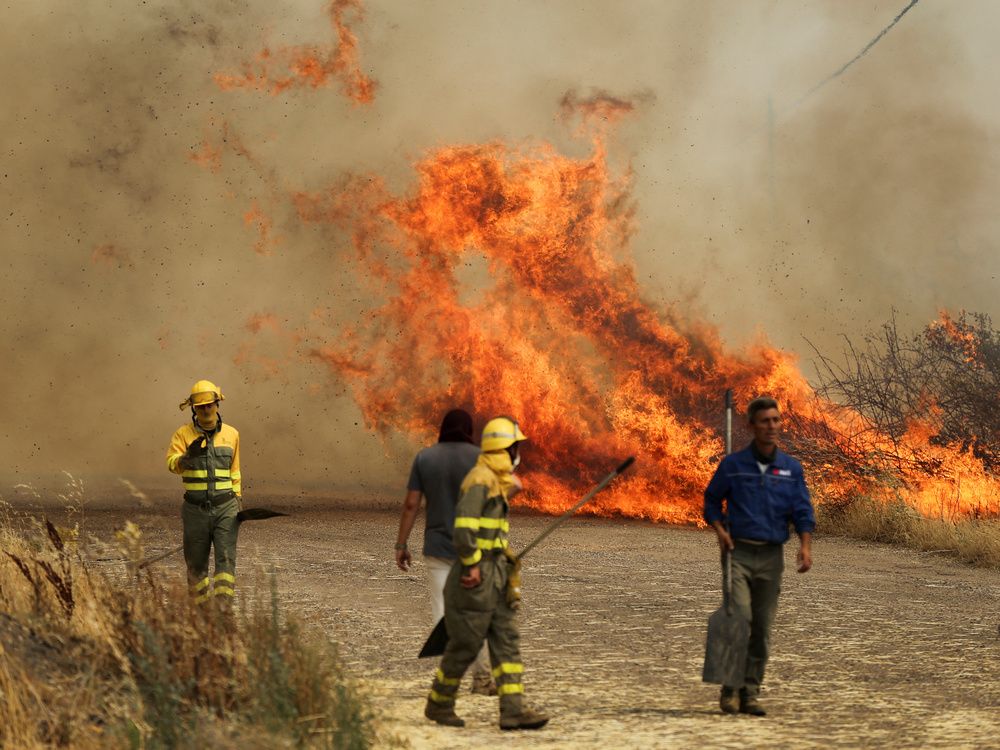 Here’s your weekly update with what you need to know about global climate change and the steps B.C. is taking to address the climate and ecological crises for the week of July 18 to July 24, 2022.

This week in climate news:

The UN’s Intergovernmental Panel on Climate Change has warned for a decade that wildfires, drought, severe weather, such as B.C.’s deadly heat dome in June, and flooding would become more frequent and more intense because of the climate crisis.

Last August, it issued a “code red” for humanity and earlier this year the panel, made up of hundreds of scientists from around the world, said the window to stop global warming from exceeding 1.5 C was closing.

Last month, it released a report with solutions for how to drive down greenhouse gas emissions, mainly by transitioning away from fossil fuels.

There is a global scientific consensus on climate change. Multiple studies published in peer-reviewed scientific journals show that human activities are the primary cause of global warming.

Check back here every Saturday for a roundup of the latest climate and environmental stories. You can also get up to date B.C.-focussed news delivered to your inbox by 7 a.m. by subscribing to our newsletter here.

A glance at B.C.’s carbon numbers:

Tense times in Lytton as wildfire expected to spread

Fire is never far from mind in Lytton.

Facing down the out-of-control Nohomin Creek wildfire 12 months after the Lytton Creek fire destroyed their town, many residents are once again on edge.

An impending heat wave is expected to fuel the fire over the coming days, creating “potentially volatile conditions during peak burning times,” according to the B.C. Wildfire Service.

But while residents have seen fire destroy, they have also witnessed its ability to protect.

Last summer’s fire left little fuel for future conflagration, reducing the threat, said Polderman. The fire is not expected to delay the debris cleanup that continues in the village.

Vancouver city council agrees to spend up to $660,000 to fight ‘Big Oil’ in court

Vancouver city council has voted 6-5 in favour of spending up to $660,000 to participate in a proposed legal action that will ask the world’s major oil companies to pay municipalities to help cover climate-change-related costs like seawall repairs and protections from extreme heat.

The idea of a class-action lawsuit being brought by municipalities against major oil companies is advocated by the Vancouver-based West Coast Environmental Law’s recently launched Sue Big Oil campaign.

Mayor Kennedy Stewart with the deciding vote supported the motion.

Agritech heralded as future of B.C. farming as farmers grapple with climate change

With robotic milking machines and automated calf-feeding systems, Bill Vanderkooi’s Abbotsford dairy farm has been one of B.C.’s early adopters of agricultural technology.

The second-generation dairy farmer said last year’s heat dome and atmospheric river flooding was a wake-up call for farmers to embrace agritech as a way to produce the food British Columbia needs in the face of the disruptions brought by climate change.

That means farmers could be swapping boots for lab coats to boost crops and improve B.C.’s food security, Innovation Minister Ravi Kahlon said ahead of his announcement Thursday about more funding for agritech education.

Kahlon announced this week that a new centre for agritech innovation will open at Simon Fraser University’s Surrey campus in September and will focus on developing and testing agritech innovations in both simulated environments and on the farm.

The excitement around the burgeoning industry, Kahlon said, is enticing people working for Microsoft and Google to take jobs in high-tech farming.

At least 13 people have died in Britain while swimming during a spell of record-breaking hot weather that sparked wildfires, damaged train tracks and triggered warnings that efforts to tackle climate change needed to be stepped up.

The London Fire Brigade endured its busiest day since World War Two on Tuesday when temperatures topped 40C (104 Fahrenheit) for the first time, igniting fires that destroyed dozens of properties in the capital and torched tinderbox-dry grassland at the sides of railway tracks and roads.

“We’ve got nothing, everything’s gone,” Timothy Stock, a resident who lost his home to fire in the village of Wennington, east of London, told the BBC.

Thirteen people lost their lives after “getting into difficulty in rivers, reservoirs and lakes while swimming in recent days — seven of them teenage boys,” British minister Kit Malthouse told parliament on Wednesday.

At least 41 properties were destroyed in London and more than a dozen elsewhere in Britain, Malthouse said.

Britain’s first-ever extreme heat warning is in effect for large parts of England as hot, dry weather that has scorched mainland Europe for the past week moves north, disrupting travel, health care and schools.

The “red” alert will last throughout Monday and Tuesday when temperatures may reach 40 C (104 F) for the first time, posing a risk of serious illness and even death among healthy people, according to the U.K. Met Office, the country’s weather service. The highest temperature ever recorded in Britain is 38.7 C (101.7 F), a record set in 2019.

While Monday is likely to bring record highs to southeastern England, temperatures are expected to rise further as the warm air moves north on Tuesday, Met Office CEO Penelope Endersby said. The extreme heat warning stretches from London in the south to Manchester and Leeds in the north.

Major wildfires in Europe are starting earlier in the year, becoming more frequent, doing more damage and getting harder to stop.

And, scientists say, they’re probably going to get worse as climate change intensifies unless countermeasures are taken.

A mass migration of Europeans from the countryside to cities in recent decades has left neglected woodland at the mercy of the droughts and heat waves that are increasingly common amid global warming. One tiny spark can unleash an inferno.

Climate change has added a scary new dimension to wildfires and made them more menacing.

Egypt’s foreign minister called on rich and developing countries to show readiness to compromise at the U.N. climate talks he is set to chair in November, saying Tuesday that the negotiations shouldn’t be a “zero-sum game” between wealthier and poorer nations.

Foreign Minister Sameh Shoukry spoke as officials from 40 countries held a two-day gathering in Berlin billed as an opportunity to rebuild trust after technical talks last month achieved little progress on major issues such as climate aid for developing countries.

He said the “very useful” discussions brought Egyptian officials “closer to understanding the areas of convergence and also possible divergence which will require more work from us all” at the November summit in Sharm el-Sheikh.

Developing countries are still waiting for rich nations to provide $100 billion in climate aid each year, a target meant to be reached by 2020. They also want to make progress on the issue of restitution for “loss and damage” caused by climate change.

Britain’s record-breaking heatwave has spurred calls for the government to speed up efforts to adapt to a changing climate, especially after wildfires created the busiest day for London firefighters since bombs rained down on the city during World War II.

The country got a break Wednesday from the dry, hot weather that is gripping much of Europe as cooler air moved in from the west. Forecasters predict London will reach a high of 26 degrees Celsius (79 Fahrenheit) on Wednesday, down from the national record 40.3 C (104.4 F) set Tuesday at Coningsby in eastern England.

Even so, travel was disrupted for a third day as rail operators repaired damage caused by the heat, and firefighters continue to mop up hotspots at the scene of Tuesday’s fires.

Britain needs to prepare for similar heatwaves in the future because manmade carbon emissions have already changed the climate, said Professor Stephen Belcher, chief scientist at the Met Office, the U.K.’s national weather service. Only aggressive emissions reductions will reduce the frequency of such events, he said.

Wildfires rage in France and Spain as heatwaves sweep Europe

Wildfires raged in southwestern France and Spain last Saturday, forcing thousands of people to be evacuated from their homes as blistering summer temperatures put authorities on alert in parts of Europe.

More than 12,200 people had been evacuated from France’s Gironde region by Saturday morning as more than 1,000 firefighters battled to bring the flames under control, regional authorities said in a statement.

“We have a fire that will continue to spread as long as it is not stabilized,” Vincent Ferrier, deputy prefect for Langon in Gironde, told a news conference.

Wildfires have torn through France in recent weeks, as well as in other European countries including Portugal and Spain, and nearly 10,000 hectares (25,000 acres) of land was on fire in the Gironde region on Saturday, up from 7,300 hectares last Friday.

When Spanish winemarker Jesus Soto returned to his land for the first time since a wildfire swept through the area, the sight of his charred grapevines left him in tears and feeling as though he had “lost part of my soul,” he said on Thursday.

With one of his vineyards – co-owned by former Spanish and former Manchester City midfielder David Silva – gutted by flames, the owner of the SotoManrique wine label estimates he will only manage half of his habitual production of 3,000 bottles of “Alto de la Estrella” this year.

Soto, with the help of his daughter Belen Soto Manrique, 24, has spent more than a decade buying up and revitalizing small, ancient vineyards near Cebreros, in the central province of Avila, whose altitude of 700-1100 meters gives the wines their character.

“A fire is always terrifying because it kills everything around it and the feeling is just awful. The feeling, the smoke, the smell … There’s a sense of total destruction,” he told Reuters.

He now must decide how to reinvigorate the vineyard –covering just over one of his 20 acres — and recover its soil, and worries about the potential impact on the quality of the wines he can produce this year.

“Everything that happens during a year in nature ends up affecting the wine,” he said.