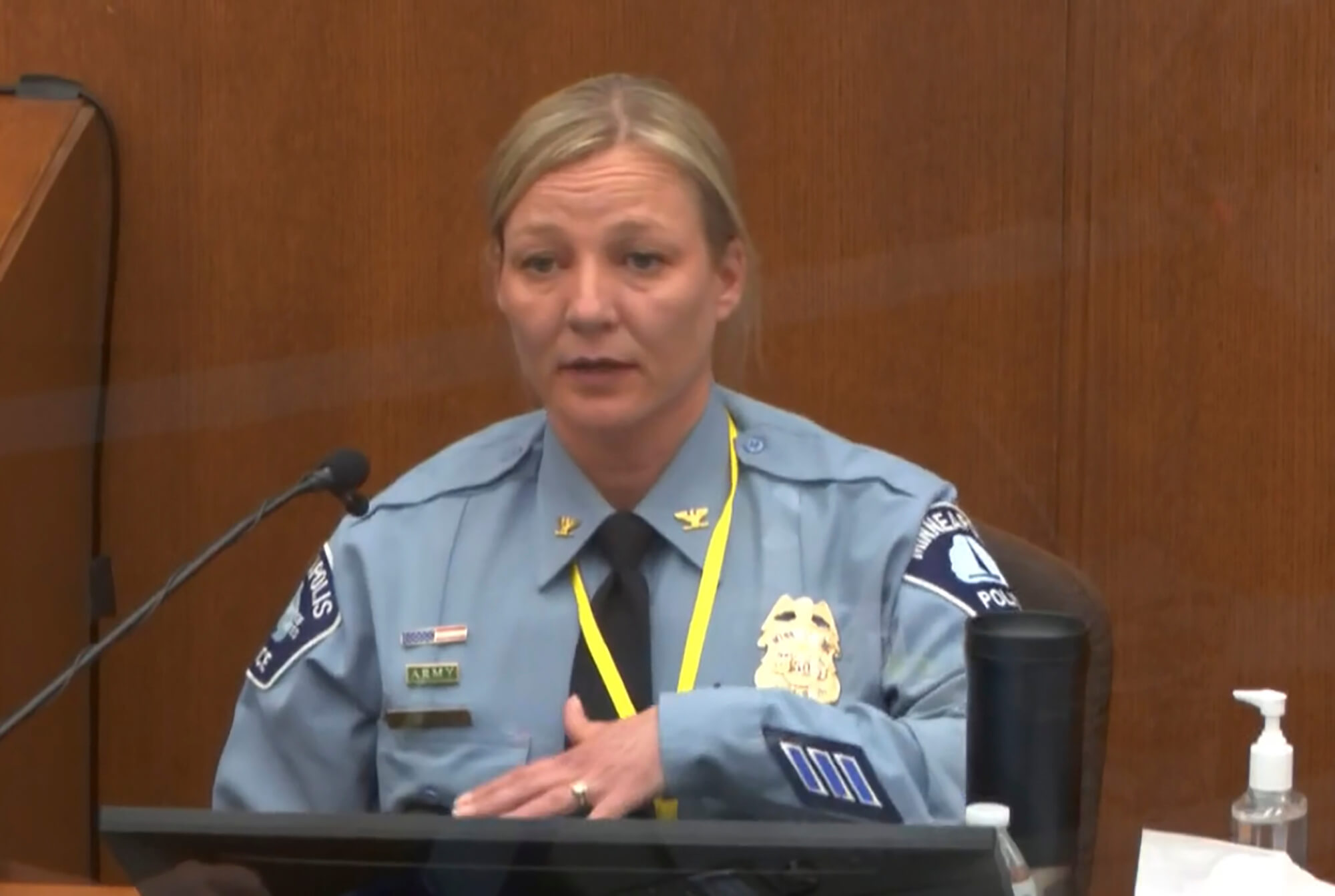 ST. PAUL, Minn. — Defense attorneys at the trial of three former Minneapolis police officers charged with violating George Floyd’s civil rights questioned a top officer Monday about the department’s training on restraints and an officer’s duty to intervene, as well as a culture that they say teaches new officers to not question their superiors.

Federal prosecutors say former Officers J. Alexander Kueng, Thomas Lane and Tou Thao violated their training by failing to act to save Floyd’s life on May 25, 2020, when fellow Officer Derek Chauvin kneeled on the Black man’s neck for 9 1/2 minutes while Floyd was handcuffed, facedown and gasping for air. Kueng kneeled on Floyd’s back, Lane held his legs and Thao kept bystanders back.

The former head of training for the Minneapolis Police Department, Inspector Katie Blackwell — on the stand for a third day — has testified that Kueng, Lane and Thao acted in a way that was “inconsistent” with department policies, including by failing to intervene to stop Chauvin, not rolling Floyd onto his side when he stopped resisting and not providing medical aid when he stopped breathing and they couldn’t find a pulse.

Thao’s attorney, Robert Paule, on Monday challenged Blackwell on whether the officers received adequate training, including on the use of neck restraints. He also presented the department’s training materials on how to recognize and stop someone experiencing “excited delirium” — an agitated state that the training materials say could warrant a more forceful restraint.

The materials presented by Paule, from in-service training that Thao would have received, say someone experiencing excited delirium, which is a disputed condition, can exhibit extraordinary strength. In the videos, people behave erratically, were not stopped by Tasers and sometimes got away from police restraint.

Blackwell previously testified that people should be rolled onto their side or placed upright after they are restrained. But in the materials shown Monday, only one sentence in a training slide says officers should put a person in the side recovery position.

Floyd struggled with officers who tried to put him in a police vehicle and continued to struggle on the ground as he said he couldn’t breathe, before he eventually went motionless. The videotaped killing triggered worldwide protests and a reexamination of racism and policing.

Some medical examiners have attributed in-custody deaths to excited delirium, often in cases where the person had become extremely agitated after taking drugs, having a mental health episode or other health problem. But there is no universally accepted definition and researchers have said it’s not well understood.

Lane’s attorney, Earl Gray, suggested Monday that his client did what he was trained to do, including trying to de-escalate the situation, stopping his restraint when Floyd stopped moving, checking for a pulse and asking whether he should be rolled on his side.

Blackwell agreed with Gray that Lane went beyond what was required by helping paramedics try to revive Floyd in the ambulance that eventually arrived.

Blackwell has testified that officers are instructed that they have a duty to intervene if a fellow officer is using unreasonable force, and are taught to use the least amount of force necessary and to stop once the person is no longer resisting. Gray pointed out that the policy says officers must stop or “attempt” to stop force, which he said his client did.

The defense attorneys have suggested that Chauvin — who was a field training officer for new recruits — took charge at the scene. Blackwell testified that she didn’t see any reason to remove Chauvin from his role as a trainer before Floyd’s killing.

Paule also said that while department policy allowed officers to use their legs to implement a neck restraint, they were not taught how to do it.

“In other words, police officers received absolutely zero training on how to use a leg as a mechanism for restraint,” he said. Blackwell agreed.

Kueng, who is Black, Lane, who is white, and Thao, who is Hmong American, are charged with willfully depriving Floyd of his constitutional rights while acting under government authority. One count against all three officers alleges that they saw that Floyd needed medical care and failed to help. A count against Thao and Kueng contends that they didn’t intervene to stop Chauvin. Both counts allege that the officers’ actions resulted in Floyd’s death.

Prosecutors have argued that the “willful” standard can be met by showing “blatantly wrongful conduct” that deprived Floyd, 46, of his rights.