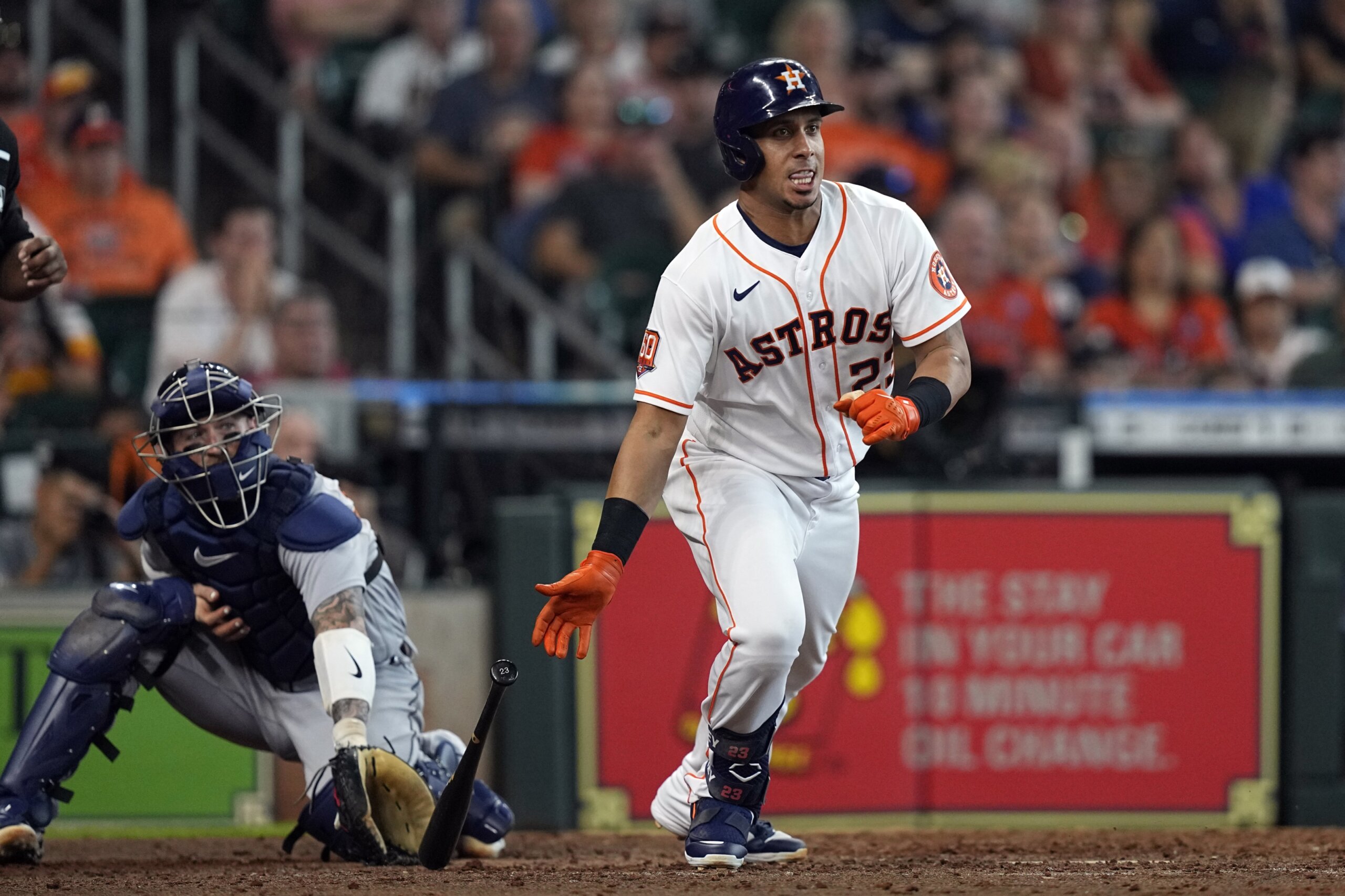 HOUSTON (AP) — Jose Altuve homered early, and Michael Brantley tripled in a two-run eighth to help the Houston Astros run their winning streak to a season-best six games with an 3-2 victory over the Detroit Tigers on Saturday.

“That’s pretty cool,” Baker said of passing Bochy, the former San Francisco Giants manager and a good friend. “It was going to come sooner or later. I’m glad it came sooner rather than later. Now I can quit keeping lineup cards.”

The Astros trailed 2-1 in the eighth when Altuve singled with one out and scored on a triple to right field by Brantley to tie it. The Tigers intentionally walked Yordan Alvarez with two outs before Michael Fulmer (1-1) walked Yuli Gurriel to load the bases.

Another walk to Kyle Tucker scored Brantley to put Houston up 3-2.

“You’re going to have these days,” Fulmer said. “We’re on a skid like this and everybody does their job except me. It’s just tough. I tried to get back in the zone, tried to make adjustments. Obviously didn’t make them.”

Fulmer’s performance ended a streak of 21 straight games without allowing a run dating to Sept. 5, 2021, which was the second-longest active streak in the majors.

Bryan Abreu (1-0) pitched a scoreless eighth for the win and closer Ryan Pressly threw a perfect ninth for his fourth save.

“He looked very sharp today … we love saves with no drama,” Baker said. “It’s good for the heart and definitely good for the soul.”

Miguel Cabrera doubled in the third inning to join Hank Aaron and Albert Pujols as the only players in MLB history to have at least 3,000 hits, 500 homers and 600 doubles in their careers. Cabrera, who got his 3,000th hit April 23, drove in two runs with that double to pass Frank Robinson (1,812) for 19th on the all-time RBIs list with 1,813.

There were runners at first and third with one out in the third when Cabrera lined his double into left field to score 2 and put the Tigers up 2-0. Cabrera raised his arm to celebrate before tapping Altuve on the head when he reached second base, and the two Venezuelans shared a short embrace before play continued.

The Tigers finished with 11 hits but had trouble cashing in on them on a day they went 1 for 16 with runners in scoring position and lost their fourth straight.

Their trouble pushing runs across ruined a good day on the mound for Eduardo Rodriguez. He allowed just one hit — the homer to Altuve — and struck out a season-high eight in 6 2/3 innings in his longest start of the year.

Rodriguez walked Alvarez with one out in the fourth before retiring the next 10 batters. He was chased after walking Tucker with two outs in the seventh. Fulmer took over and allowed a single to Jeremy Peña but retired Chas McCormick to end the threat.

Altuve connected off Rodriguez on his home run to the seats in left field with two outs in the bottom of the inning to cut the lead to 2-1.

“They kind of pinged him to death,” Baker said. “They had a whole bunch of hits up there but there were only a couple of balls that were hit hard and both were down the lines.”

The Tigers had a chance to add to the lead in the eighth inning when Jeimer Candelario singled and reached second on an error by Alvarez with no outs. But Jonathan Schoop hit a comebacker, and Abreu struck out Willi Castro before Gurriel leaped at first base to make a nifty catch on a ball hit by Spencer Torkelson.

The series wraps up Sunday when Jake Odorizzi (2-2, 4.14 ERA) starts for Houston. The Tigers have yet to announce a starter.