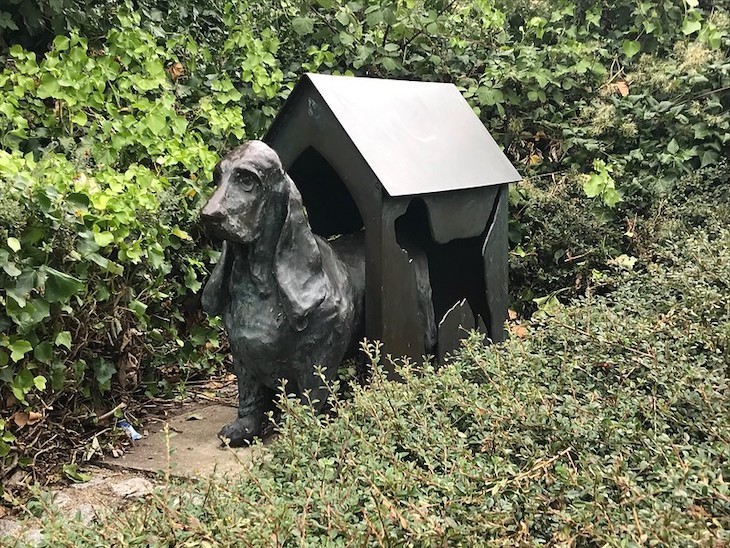 Have you ever been to a tube-themed fancy dress party? You know, the ones where you have to come as your favourite underground station.

Among the many Angels and dog costumes (Barking), there’s always someone who turns up in a crown with a pet lobster. “What did you come as?” they’re asked. “King’s crustacean.”

Using visual puns to represent places or names is as old as the hills. It’s common in heraldry, where it’s known as canting arms or a rebus. The Bowes-Lyon family, for example, is represented by a crest with lots of bows and lots of lions. Princess Beatrice has three bees on hers, because “bees thrice” sounds a bit like Beatrice. Yes, really.

A solid London example is Thomas Gresham, founder of the Royal Exchange. His coat of arms contains a grasshopper, because Gresh sounds akin to grass. This is why you’ll find the symbol dotted around the financial city.

Places, too, can use visual puns. An obvious one is the cat of Catford (top), but there are many more around town. Some are cheeky, some you’d never notice, while others are pretty darned obvious. Every one adds to the charm and quirkiness of London.

“Say what you see,” the host of Catchphrase advises. That applies on the Victoria line, where each station boasts a tile pattern that reflects the area in some way. The design above is from… well, see if you can guess from the ton of bricks.

Yes, it was Brixton. Equally punny is the fellow Victoria line station of Warren Street. Here, the tile artist has gone for a maze design suggestive of a warren. Again, say what you see. The area was never known for rabbits or, indeed, labyrinths, and is instead named after local rich lady Anne Warren.

3. The black horse of Blackhorse Road

On a related theme, Blackhorse Road, the penultimate stop on the Victoria line heading north, bears two pictorial representations of its name. One is another tile pattern down on the platforms, but you can also find this slightly squashed stallion outside the tube exit.

Lurking in the bushes of St Francis’s Park can be found this peculiar likeness of a dog emerging from a kennel. Yes, it’s on Dog Kennel Hill in East Dulwich. The literal sculpture was commissioned by Sainsbury’s (who have a superstore alongside) and was designed by artist Stephen Bunn.

The nearby area of Goose Green is replete with anserine references. Look out for the goose-head-shaped bollards to the south-west of the green, as well as this attractive mosaic near the playground.

From goslings to godlings. The statue of Eros (don’t argue) in Piccadilly Circus has long been implicated in an elaborate visual pun. It’s said that his bow is empty because he’s fired his arrow east, where it is now buried underground… in other words, his shaft’s buried in Shaftesbury Avenue. Sadly for the myth, Eros (or whoever) has never pointed his love bow along Shaftesbury Avenue, and there’s no evidence to back the story up.

7. A horse looks down

Horselydown was once a well-used place name for the area of Bermondsey closest to Tower Bridge (as in the parish of St John Horselydown). It’s little known these days, though lives on here and there. One nod is the statue of Jacob the Horse, who stands guard over the blue-tiled walls of The Circle on Queen Elizabeth Street. The sculpture is a triple-reference to the local area. It represents the dray horses that were once a common sight around the breweries of these parts; the name Jacob recalls Jacob’s Island, a Victorian slum where Bill Sikes met his end in Oliver Twist; and he’s also a visual pun on the old name of Horselydown.

8. The cat of Catford

Arguably London’s most famous sculpture of place, the fibreglass cat of Catford has balanced playfully/menacingly over the town centre since 1974. It remains a symbol of the area and even has its own Twitter account. Curiously, the place name of Catford may have a genuine feline connection. The etymology clearly suggests a ford over the Ravensbourne, but whether it was associated with wild cats or cattle is lost to time.

9. The elephant above the room

And we can’t forget the Elephant and Castle. The area has featured a large pink elephant with a castle on its back for generations. The sculpture shown above stood on the shopping centre for most of its life, but when that was demolished, Pinky packed its trunk for Castle Square.

Cousin Lane runs down to the fine Fuller’s pub, The Banker. But to get there you have to pass this pair of cannons. It’s a rather obvious nod to Cannon Street Station, which stands above those brick arches. A more subtle nod — actually, a very subtle nod — can be found at the eastern end of Cannon Street. Here, a frieze of sculpted candles is hewn into the face of number 120:

The connection becomes more clear when we learn that Cannon Street was originally Candelwrichstrete, the street of the candles makers.

And finally, a bit of an obvious one. Paddington Bear is, of course, named after the station in which he was found. So if this counts as a visual pun, it’s a very weak one. Still, who can say no to the loveable ursine. His likeness can be found in several locations around the station. This sculpture on Platform 1 is the best realised, but you’ll also find several fibreglass versions around the area, along with another sculpture on Paddington Green. Upstairs, the Mad Bishop and Bear pub is another reference to the Peruvian fellow.

We’ve doubtless missed many further examples. What other parts of town have their own namechecking works of art? Let us know in the comments.