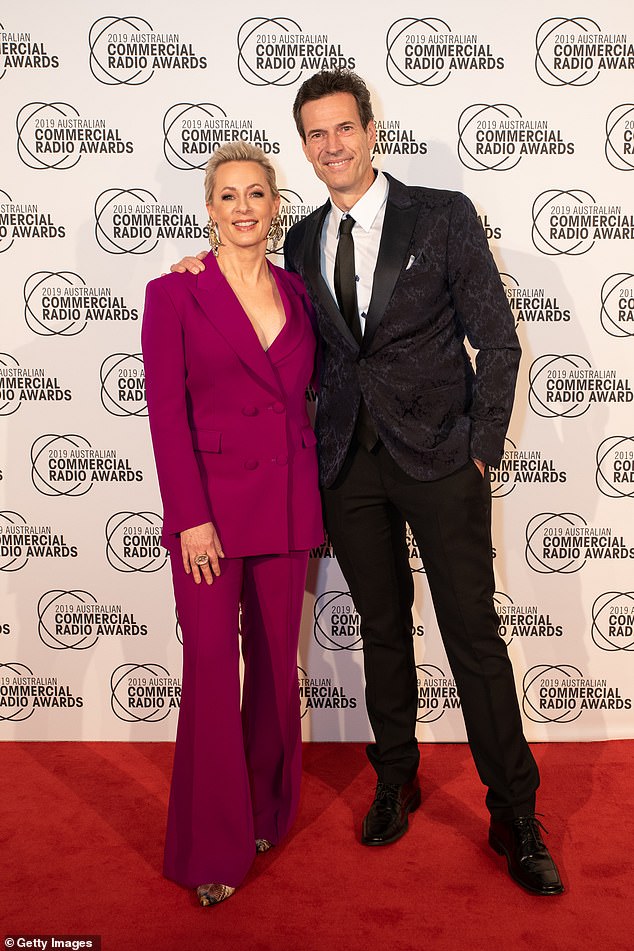 The Sydney WSFM breakfast broadcaster, 60, and her co-host Brendan Jones, 54, were discussing being ignored at JB Hi-Fi and a surf shop.

Jones recalled being given no help at the electronics retailer when he visited to ask about buying a wrist band for his Fitbit watch that he had seen in an online catalogue.

‘I realised when I turned 54 that I’m becoming invisible,’ he said on Wednesday morning.

Scroll down for audio

Radio personality Amanda Keller (left) says middle-aged women are invisible unless they wear loud glasses and jewellery. The WSFM broadcaster, 60, and her co-host Brendan Jones (right), 54, were discussing being ignored at JB Hi-Fi and a surf shop

‘I’ve become one of those guys: you go into a shop, you’re just invisible.’

Keller, who also hosts Ten’s The Living Room, said older women would be ignored or completely unnoticed unless they wore bright colours.

‘Welcome to the world of middle-aged women,’ she said.

‘So that’s why women, as we get older, you wear glasses with red rims, you wear loud, colourful jewellery, you have to stand out or people completely ignore you.’

Jones asked if that meant dressing like a loud, 75-year-old fashion designer: ‘So I’ve got to be like Jenny Kee?’

Keller, who was a reporter on Beyond 2000 during the late 1980s, said that was one tactic to avoid being ignored.

‘You have to dress, you have to go into JB Hi-Fi or even better, a surf shop dressed like Jenny Kee and tell me how you get on,’ she said.

‘You won’t be dismissed I assure you.’

Next year will mark the 50th anniversary of Kee setting up the Flamingo Park shop in Sydney’s Strand Arcade with another fashion pioneer Linda Jackson.

Keller, a TV reporter on Beyond 2000 during the late 1980s, said older women would be ignored unless they wore bright colours. Jones asked if they meant dressing like fashion designer Jenny Kee (pictured left with former business partner Linda Jackson)