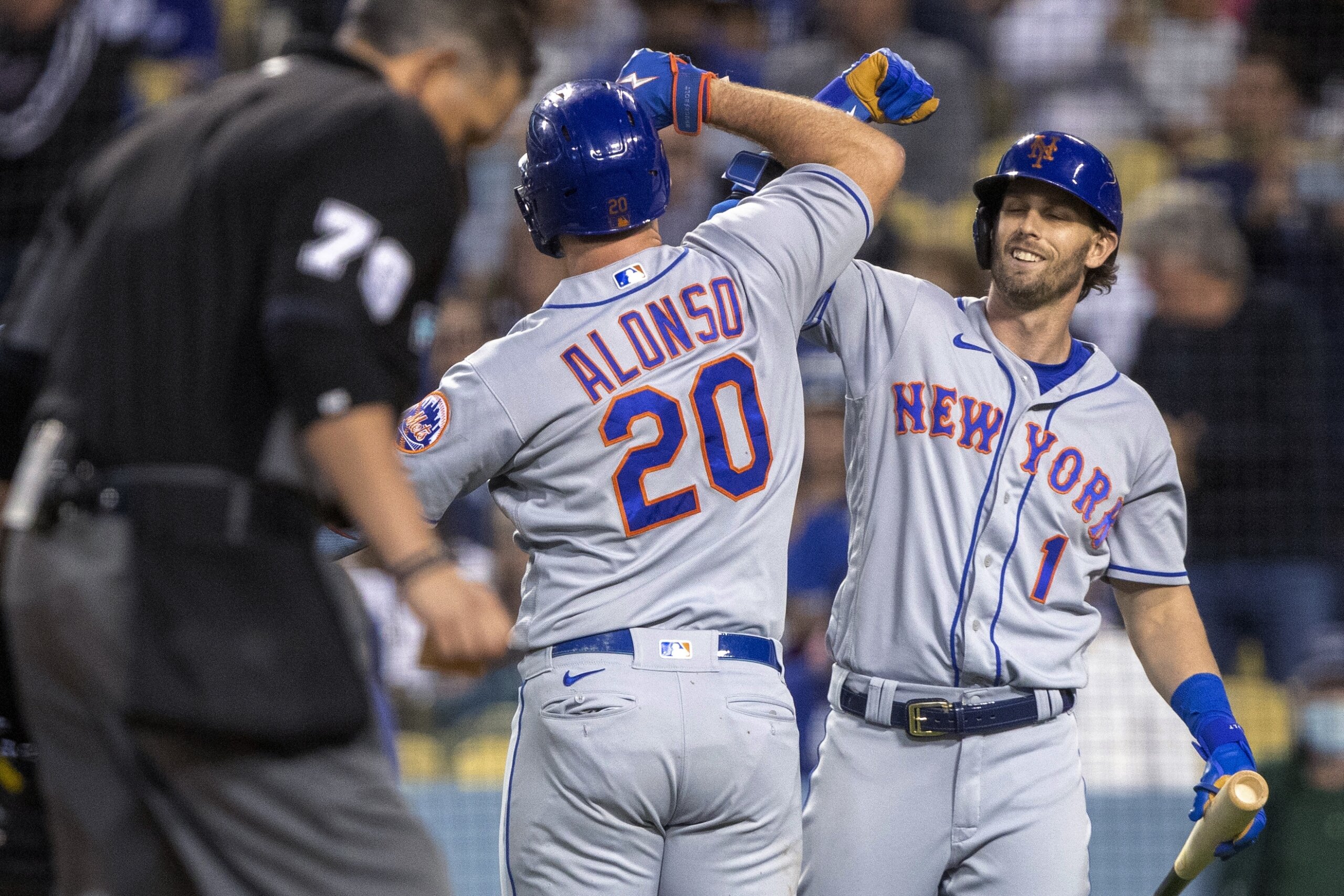 LOS ANGELES (AP) — Pete Alonso was already going to be a favorite for next month’s All-Star Home Run Derby as the two-time defending champion. With the way he’s hit at Dodger Stadium, the Mets slugger looks primed for a three-peat.

Alonso homered twice for the second time this season, drove in five runs and bounced back from a costly error as New York beat the Los Angeles Dodgers 9-4 Saturday night.

“I still haven’t gotten an invite yet. I really enjoy it,” said a smiling Alonso about the July 18 derby, which will be held the night before the All-Star Game at Dodger Stadium for the first time since 1980.

The invite is a matter of formality for Alonso, who has bashed his way through the season’s first two months. He won the Derby in 2019 at Cleveland, then again last year in Atlanta. The All-Star Game was canceled in 2020 due to the pandemic.

He’s tied with LA’s Mookie Betts for the NL home run lead at 19 and with Cleveland’s Jose Ramirez for the major league lead in RBIs with 53.

Alonso is the first player in the 60-year history of Dodger Stadium to go deep seven times in his first 11 games played here.

“I mean, it’s a very humbling stat. It’s one of those historic parks,” Alonso said.

Francisco Lindor and Eduardo Escobar also connected for the Mets, who bounced back after being held to one run in dropping the first two games of the four-game series between the NL’s top teams. Coincidentally, that run was also on an Alonso homer.

“Pete’s a strong man. When he collides with the ball, it places where you can’t defend it,” Mets manager Buck Showalter said.

Roberts said after the game that it was an oversight on his part.

Colin Holderman (3-0), the second of seven Mets pitchers, was credited with the win.

Betts drove in three runs for the Dodgers, who have dropped four of six on their current homestand. Buehler (6-2) had the shortest outing of his career, allowing five runs in 2 1/3 innings.

“It’s very uncharacteristic as far as kind of the inconsistencies. We’ve come to expect the quality start every time he goes out there,” Roberts said. “When you can’t get ahead, can’t put guys out, and make mistakes, it’s gonna get exposed, regardless of who you are.”

Trea Turner went 0 for 4 to snap his 26-game hitting streak, which was the longest in the majors this season.

The Dodgers took a 4-1 lead in the second, mainly on an error by Alonso. With one out in the second, he fielded Cody Bellinger’s grounder, but his throw to second base drew Lindor off the bag, allowing Hanser Alberto to get in safely. The Dodgers had the bases loaded with two outs when Betts lined a double to the wall in right-center to clear the bases.

The Mets responded with four of their own in the third. Starling Marte had an RBI double, and Brandon Nimmo scored on Lindor’s grounder to bring New York within a run before Alonso chased Buehler after driving a slider over the wall in left field to give the Mets a 5-4 lead.

Alonso then notched the 13th multi-homer game of his career with a three-run shot to right in the seventh to extend the lead to 9-4.

Lindor got the Mets on the board with a solo shot in the first inning, and Escobar homered in the fourth. It is the second time the Mets have gone deep four times in a game this season.

David Peterson allowed four runs in 3 2/3 innings but only one earned, and struck out six. The left-hander gave up only two hits but walked four and was at 90 pitches when Buck Showalter pulled him after Betts lined a foul ball down the left-field line.

Buehler didn’t get out of the third inning for only the second time in 105 career starts. He yielded five hits with two walks and three strikeouts.

Dodgers: LHP Clayton Kershaw (right SI joint inflammation) will go at least three innings for Class A Rancho Cucamonga on Sunday. Roberts added there is a possibility that Kershaw could return to the rotation during next weekend’s series in San Francisco.

Mets: RHP Trevor Williams (1-3, 3.58 ERA) starts against LA on Sunday. He threw five scoreless innings in his last start against Washington on May 31.