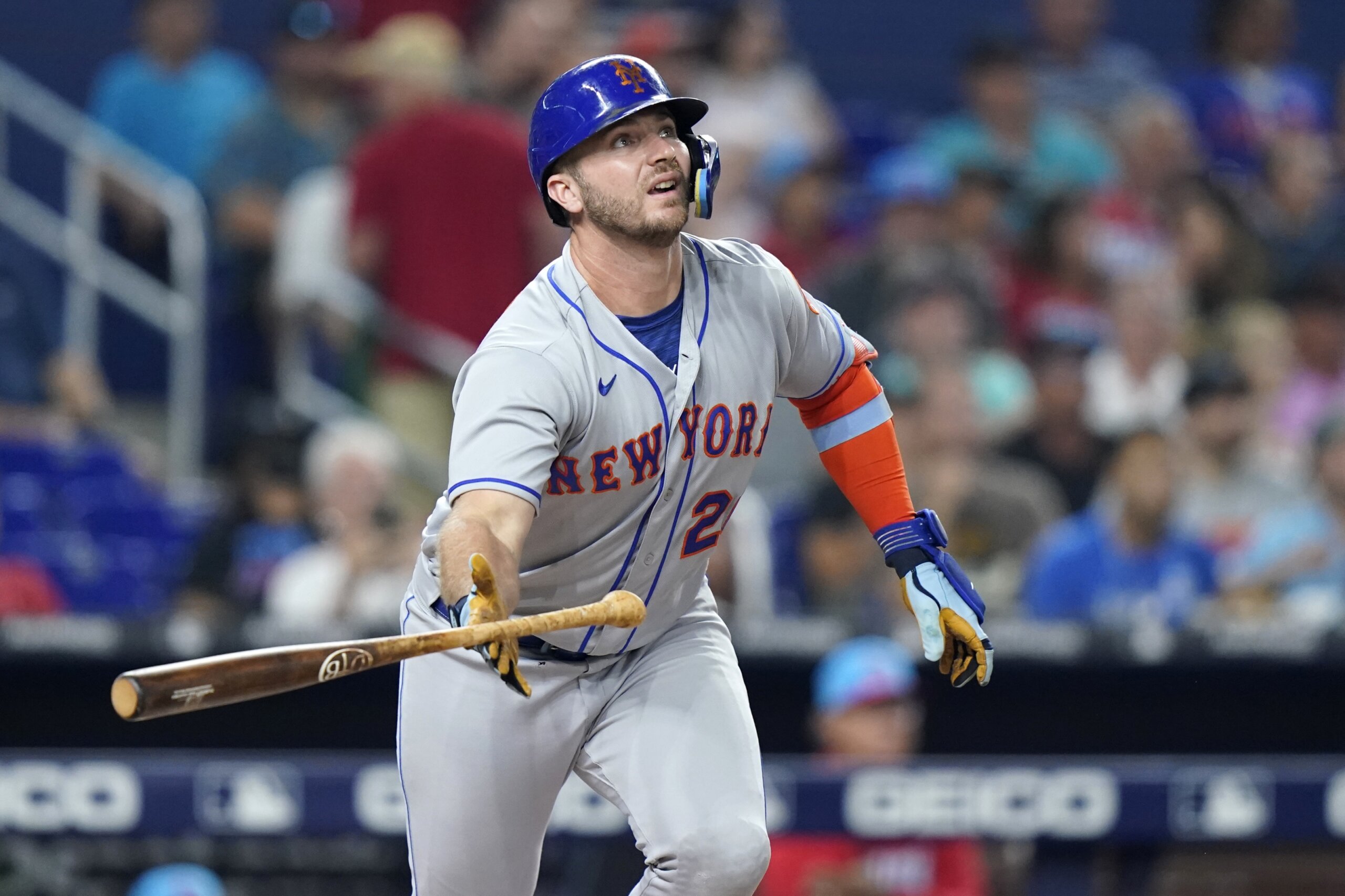 MIAMI (AP) — Pete Alonso hit two leadoff homers, including a go-ahead shot in the eighth inning, and the New…

Alonso’s home run over the left-center field wall against Miami reliever Jimmy Yacabonis (0-1) snapped a 3-3 tie. It was Alonso’s NL-leading 22nd homer of the season and 14th multi-homer game of his career

Brandon Nimmo’s third hit, an RBI double in the ninth, increased the Mets’ lead. Francisco Lindor doubled and singled and Starling Marte had two hits for the NL East leaders.

New York starter Chris Bassett pitched seven strong innings. Bassett (6-5) allowed three runs and six hits while striking out five. Seth Lugo pitched a perfect eighth and Edwin Díaz struck out the three batters he faced in the ninth for his 16th save.

The Marlins erased a 3-0 deficit on Jesús Sánchez’s two-run homer in the fourth and Bryan De La Cruz’s solo shot in the fifth.

Alonso gave the Mets an early advantage with his homer against Miami starter Trevor Rogers in the second inning. Initially, Alonso thought the shot had not cleared the right-field wall and stopped at second before resuming his trot.

The Mets padded their lead on Mark Canha’s RBI groundout and Eduardo Escobar’s run scoring single in the fourth.

Rogers was lifted after surrendering one-out singles to Nimmo, Marte and Lindor to load the bases in the fifth. The left-hander allowed three runs, seven hits, walked one and struck out five. He has not completed six innings since April 28.

Zach Pop relieved Rogers and retired Alonso on a pop out to first and struck out Canha. Marlins relievers had thrown 9 2/3 scoreless innings until Alonso’s second homer.

The Marlins settled for two runs in the fourth with Sánchez’s homer. A third run was negated after New York right-fielder Marte threw out Garrett Cooper at third. Cooper led off with a single and attempted to reach third on Jesús Aguilar’s single to right.

The game had additional significance for Marlins second baseman Jazz Chisholm Jr. because the club promoted it as Bahamian Heritage Day. But the prospects of the Bahamian native playing looked bleak after back spasms forced him to leave in the sixth inning Friday. Chisholm recovered sufficiently and doubled in four at bats.

Mets: RHP Max Scherzer (oblique strain) will make another rehab start at one of the club’s minor league affiliates early next week. There was speculation Scherzer would be activated from the injured list and start the series finale Sunday. … INF-OF Jeff McNeill (right hamstring tightness) was not in the lineup for the fourth consecutive game. .RHP Colin Holderman (right shoulder impingement) will throw in a rehab appearance Sunday at Triple-A Syracuse.

Marlins: INF Miguel Rojas returned to the lineup after sitting out Friday because of a bone bruise in his right foot. . LHP Jesús Luzardo (left forearm strain) is throwing from 105 feet.