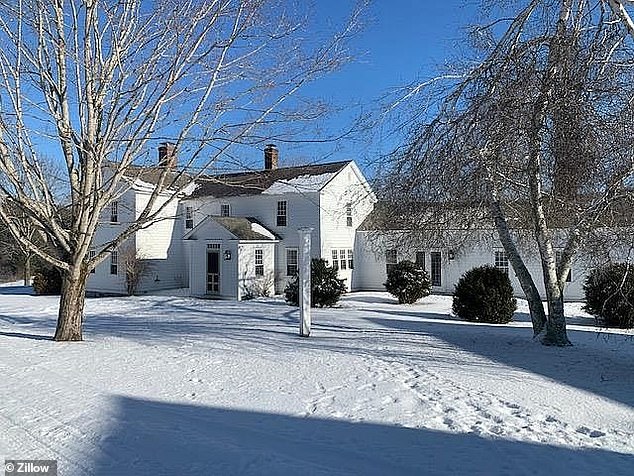 Alec Baldwin purchased a historic 50-acre farm in Vermont for $1.7million Tuesday – the same day he was hit with a wrongful death suit by the family of the cinematographer he accidentally shot dead in October.

The purchase by Baldwin, 63, in the small mountain town of Arlington, comes after the actor spent months in the area after fleeing his home in New York City following the tragedy in New Mexico, which resulted in the death of Halyna Hutchins.

‘Obviously a purchase is public information,’ broker Faith Rhodes, who handled the sale, told local outlet the Bennington Banner Thursday when asked about the deal.

‘It’s an historic farm. East Arlington Village is historic itself.’

‘That part of Arlington is very old and historic. It dates back to the Green Mountain Boys,’ she told the paper, referring to a Revolutionary War-era militia that once protected the area from settlers from other states and later British troops during the latter half of the 18th Century.

‘It’s a really beautiful part of the village.’

The Vermont farmhouse, situated in the sleepy mountain town of Alrington, is nearly 250 years old, and was built in 1780 or 1783

Baldwin purchased the 50-acre farm for $1.7million Tuesday – the day he was hit with a wrongful death suit by the family of the cinematographer he accidentally shot dead in October

According to Rhodes’ listing for the home, the property sold February 15 for $1.75 million.

Previous real estate records show that the modest home – which features ‘a 3,600 [square foot] main house, and a nicely renovated 1800 [square-foot] guest cottage with 2 baths,’ according to Rhodes – sold for just $559,000 in 2014, suggesting the actor paid a markup of more than 200 percent.

It is unclear what renovations, if any, have been done on the property.

Baldwin’s family has deep ties to the area, with his wife Hilaria’s grandfather, David Lloyd Thomas Sr., having having resided there for most of his life until his death in March 2020, at 92.

Thomas had traveled to the town – which boasts a population of just over 2,000 –  to research his genealogical roots, and found that his family’s connection to the area predated the American Revolution, his obituary revealed.

He and his wife ended up purchasing a summer home and later a farmhouse in the small, sleepy township, and made the area their permanent home while intermittently traveling to New York City – where Baldwin owns a home in Greenwich Village – and Massachusetts.

In October, following the tragedy on the set of Baldwin’s canned film Rust when Baldwin fired a live round out of a loaded prop gun killing Hutchins, Baldwin and his wife briefly relocated to the area, renting a a 4,800-square-foot, 3-acre home with six bedroom suites, each with a private bath and many with a gas fireplace and jetted tubs, in the nearby township of Manchester, less than 15 minutes away.

The home, which features a cottage as well as a barn, sits on 50 acres of rural farmland

The actor was rumored to be house-hunting in the area at the time, and had reportedly toured a 14,000-square-foot, nine-bedroom property on 13.5 acres with a dozen bathrooms priced at $3.6 million, Dirt reported at the time.

While not nearly as opulent, the price of Baldwin’s new property suggests that it’s interior has been newly renovated to accommodate the A-lister, his wife, and their six children – Carmen, eight, Rafael, six, Leonardo, five, Romeo, three, Eduardo, one, and Lucia, 10 months.

Asked if she thinks the Baldwins are likely to spend time at the the new property, Rhodes said, ‘I’m not sure … It’s certainly not their primary residence,’ referring to the actor’s palatial 4,137-square-foot apartment in New York City – which they have quietly been trying to sell for well over a year – as well as an estate, also a farmhouse, in Long Island’s posh Amagansett neighborhood, near East Hampton.

Rhodes added to The Banner: ‘But they love the community as well. They got to know it and loved it.’

The purchase by Baldwin, 63, comes after the actor spent months in the area after fleeing his home in New York City after the tragedy on a film set in New Mexico

The day the sale was finalized, Baldwin was hit with a lawsuit filed by the family of slain cinematographer Halyna Hutchins (pictured)

In a previous ad, the property was described as a ‘classic Vermont 18th century farm [that] features 55 beautiful acres, a 3,600 [square foot] main house, and a nicely renovated 1800 [square-foot] guest cottage with 2 baths.’

The day the sale was finalized, Baldwin was hit with a lawsuit from slain cinematographer Hutchins’ family

The suit stated that ‘Hutchins deserved to live, and the Defendants had the power to prevent her death if they had only held sacrosanct their duty to protect the safety of every individual on a set where firearms were present instead of cutting corners on safety procedures where human lives were at stake, rushing to stay on schedule and ignoring numerous complaints of safety violations.’

The attorneys said in the video presented Tuesday that Baldwin had ‘refused’ training for the kind of gun draw he was doing when he shot Hutchins. The lawsuit also claims that Baldwin never checked the gun himself for ammunition before using it.

They also presented a list of ‘at least 15 industry standards’ an attorney for the family said producers had ignored on set.

These included failure to use a prop gun rather than a live weapon, a lack of individuals qualified to handle weapons on set at the time of the shooting, and lack of protective equipment for crew.

As of Friday afternoon, Baldwin has not commented on this latest lawsuit. He and Hilaria, 37, were seen in Manhattan near their apartment Wednesday, pushing their two youngest kids in a pair of strollers

The attorney, Brian Panish, also produced a copy of a text message where a local camera operator made safety complaints to producers that there had been three unsafe weapons discharges on the set, calling the environment ‘super unsafe’.

The unit production manager responded ‘with callous sarcasm’, according to the lawsuit. He said in response that it was ‘awesome’ and ‘sounds good’.

As of Friday afternoon, Baldwin has not commented on this latest lawsuit. He and Hilaria, 37, were seen in Manhattan near their apartment Wednesday, pushing their two youngest kids in a pair of strollers.

Aaron Dyer, an attorney for Baldwin and other Rust producers, said of the suit, ‘Any claim that Alec was reckless is entirely false.’

At one point, the Baldwin family had 3 apartments at the iconic Devonshire House – a classic pre-war condominium. Baldwin bought the Greenwich Village building’s penthouse for $11.7 million in October 2011; and in June 2012, his wife, Hilaria, bought the unit next door in her name. The following year, the pair scooped up another unit, on the building’s eighth floor, for $2.25 million. The actor sold the last apartment in 2015, at a loss, for $2.1 million.

An 18th-century farmhouse on Long Island, Baldwin bought the property in 1995, with Hilaria moving in after the couple started dating in Spring 2011. The pair then gut renovated the property, with the goal of transforming into a bright, modern family home for them and their children. The shingle-style house was built in 1753 with a saltbox design – long, pitched roof that slopes to the back – before its conversion to a full, two-story home in the 1790s, according to local historians. It boasts a wood-paneled interior, a pristine kitchen, hardwood floors, 4 bedrooms, and a ‘wine banquette.’