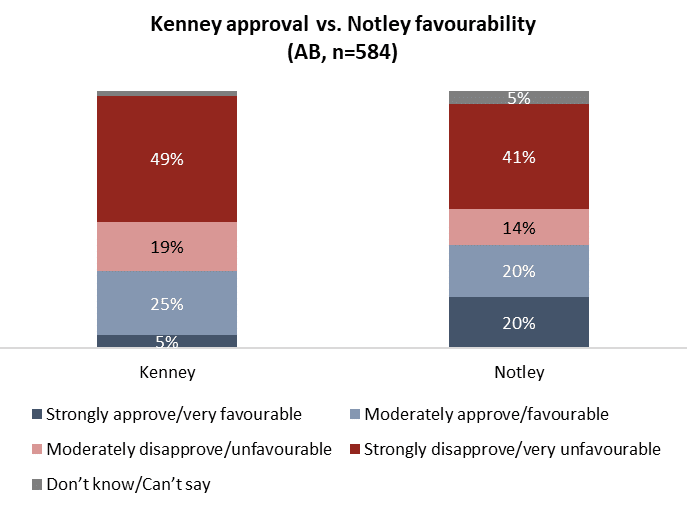 Ahead of a critical leadership review next month for Kenney, the numbers show a negative impression in nearly every field, though the government still looks to be in a statistical tie with the Opposition NDP.

The Angus Reid poll found a negative impression in every area for the Kenney government.https://t.co/RP3BW24o0c pic.twitter.com/x3W3xPZpy3

If Kenney does have one thing going for him, it’s that his approval rating is no longer the lowest among premiers in Canada, as Manitoba’s Heather Stefanson took that spot in Angus Reid’s previous poll earlier this month. But that’s where the good news stops.

While Kenney has gained some ground in the national ratings, nearly half of those polled in his own province disapprove of him altogether.

Compared to his counterpart, Alberta NDP Leader Rachel Notley, he may have moderate ratings leaning his way, but when it comes to strong approvals and disapprovals, the cards aren’t in his favour.

As for voter intent in a provincial election, both Kenney and Notley are in a near tie, though Notley’s NDP seem to hold a slight advantage.

After trailing for three consecutive quarters, Kenney did gain some ground as 38 per cent of Albertans say they would vote for Kenney, while 40 per cent say they’d go for Notley.

Looking at a distant third place is the province’s Wildrose Independence Party which 11 per cent of Albertans say they’d vote for.

According to the poll, the UCP will benefit from loyalty as seven in ten of decided voters who backed Kenney in the last election would do so again. While the NDP have retained nearly all their previous support, while also pulling in a few voters who chose UCP.

The United Conservative Party leadership review is set to take place on April 9. In what was supposed to be an exciting weekend of drama in Red Deer, some of the excitement was lost when it was announced the review would be by mail-in ballot.

Critics have said it makes it easier for Kenney to win and increases the opportunity for vote-rigging.

“The party has unjustifiably altered the rules and it has become apparent that (once) trust and for a fair and equitable process are tainted one option remains. The party should forgo the review fiasco and move immediately forward with a leadership contest to save the credibility of the party and find a new leader,” said Peter Guthrie, MLA for Airdrie-Cochrane.