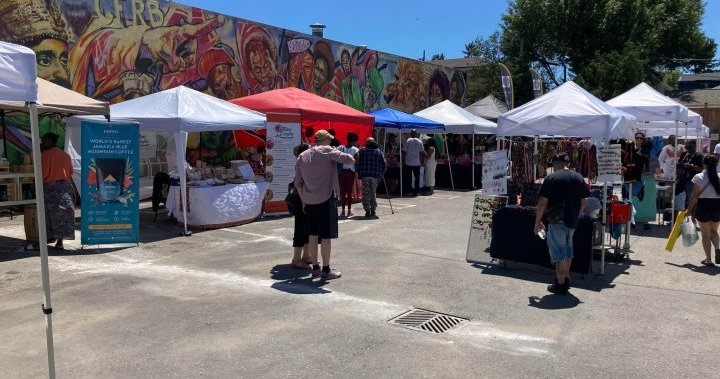 A unique farmers’ market returned to the streets of Toronto’s Little Jamaica this weekend.

Foods from Caribbean islands, African countries, as well as local produce grown by farmers in the Afro-Caribbean diaspora were on offer. It will be happening weekly throughout the summer until late-September.

“We are Canada’s first culturally-specific farmers’ market and we are here every week for the next 13 weeks in Little Jamaica’s Reggae Lane,” Lori Beazer, who founded the market, told Global News.

The market began in 2017 in the Jane Street and Wilson Avenue area, launching again in Little Jamaica in 2021. Eighteen separate vendors take part in the market, selling baked goods and fresh produce as well as imported foods from the Caribbean.

“It’s also important that we eat closer to home.”

The market is in the Little Jamaica-Afro Caribbean Cultural District, created by the City of Toronto to help preserve the area’s unique history,

The rich Caribbean history enshrined in Little Jamaica’s neighbourhood dates back to the 1960s when Jamaican migrants settled in Toronto, transforming the space into a global hotbed for reggae culture.

“The churches were there, it was a real community site … you could speak your language, you could speak the Jamaican Creole or the patois, it was a place where you could just exhale,” said Cooper, who remarked on the ‘largesse’ of cultural capital the neighbourhood has outputted too.

The market’s organizers say they hope the event can help the area recover from the pandemic and years of construction disruptions along Eglinton Avenue.

“The Afro Caribbean Farmers’ Market wishes to plant its roots in the heart of this new district,” the market’s website explains, citing the disruption caused by ongoing construction on the Eglinton Crosstown project.