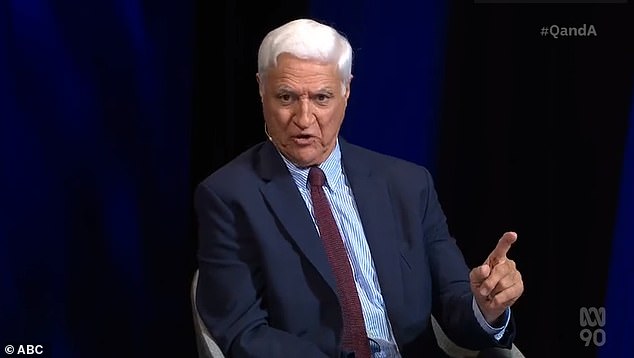 Controversial MP Bob Katter has erupted over the Australian government’s lack of guns and missiles following the ‘concerning’ security pact between China and the Solomon Islands.

There are fears the deal between the two countries will mean China could build a military base less than 2,000km from Australian shores.

The issue was brought up on the ABC’s Q&A panel on Thursday night when an audience member asked if Australians ‘had much to fear’ about the agreement.

Liberal MP Keith Pitt said the government was ‘concerned’ about the decision which was ‘incredibly disappointing’ and not something Australia agreed with.

Mr Pitt then referenced comments made by Deputy Prime Minister Barnaby Joyce who said Australia needed to be as strong as possible.

A visibly frustrated Mr Katter then cut in before unleashing a tirade where he accused the government of failing to develop enough arms to defend Australia against any potential Chinese threats.

Mr Katter said he believed the Solomons would be a base for China and those who disagreed with him were ‘very, very naive’.

‘If you want to defend this country you build a missile fortress wall around it,’ he continued.

‘If you make it through that missile fortress wall then waiting for you is five million rifles.’

It’s not the first time the maverick MP has spoken of his desire for Australians to be armed.

The outspoken politician earlier called for high school students to be given guns to protect Australia from an ‘existential threat’ from China.

Mr Katter said under his plan 13-year-olds would be trained to use rifles and schools across the country would have armoury buildings where weapons are stored.

He added that he was taught to use a rifle ‘as big as he was’ when he was in his early teens.

Prime Minister Scott Mr Morrison has said the Solomon Islands government had stated it would not allow any Chinese naval bases under the deal.

China’s security agreement with the Solomon Islands could see military bases built by Beijing within 2,000km of Australia

But Mr Joyce didn’t rule out the possibility of a Chinese base in the Solomons.

‘(It’s) dual-purpose, which means China is able, if they follow through, to set up a military base there,’ he said.

‘That’s a very bad day for Australia. We don’t want our own little Cuba off our coast.’

Ms Payne in a joint statement with Pacific minister Zed Seselja said they were ‘deeply disappointed’ by the deal.

‘We are concerned about the lack of transparency with which this agreement has been developed, noting its potential to undermine stability in our region,’ the statement read.

‘We continue to seek further clarity on the terms of the agreement, and its consequences for the Pacific region.

China said the deal was ‘public, transparent, open and inclusive, not directed at any third party, and is parallel to and complementary to the existing bilateral and multilateral security co-operation mechanisms in Solomon Islands’ – but US officials believes it ‘leaves the door open’ for Chinese aggression in the Pacific.