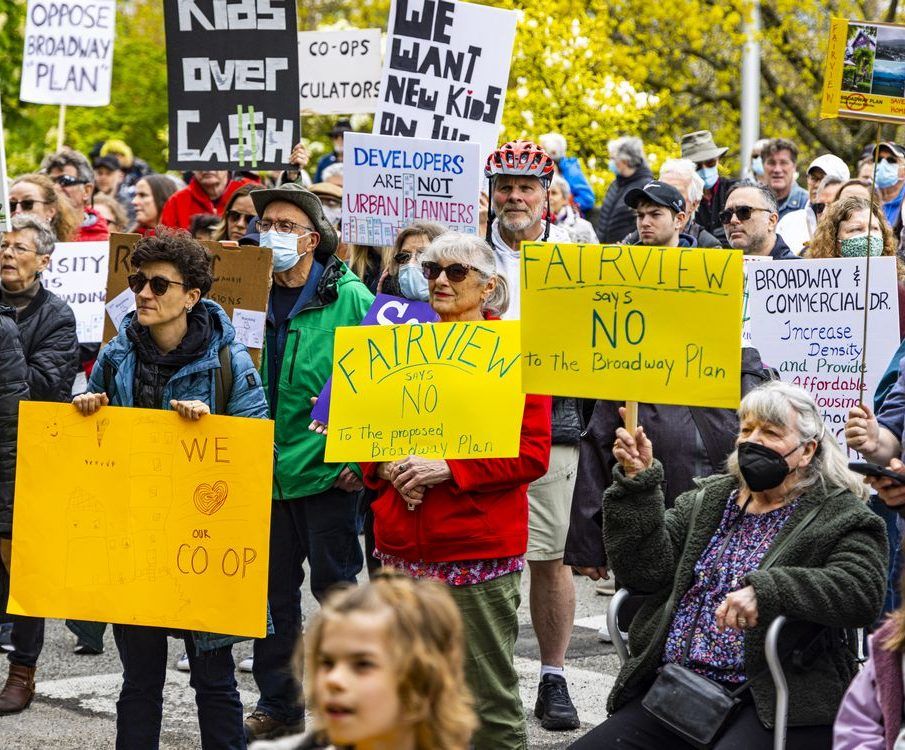 Fairview senior Wynona Hill was determined to protest Vancouver’s $3 billion plan to extend the SkyTrain 5.7 kilometres down Broadway Avenue, near her home at the Heritage Housing Cooperative. She ordered HandyDart services to make it to the steps of city hall Saturday afternoon.

The 85-year-old was among more than 100 demonstrators, including many of her neighbours, who waved signs in ardent opposition of the more than 300 highrises proposed to densify Mount Pleasant, Fairview and Kitsilano, adding up to 50,000 residents in a 50-block area in the next three decades.

“Where will I go? I live off of my Old Age pension,” said the tenant of 26 years.

“How could a middle-class family be able to afford anywhere else in Vancouver to live? I worry about the children, who do stuff together around our co-op and bring me a lot of joy — you’re not going to get that in a highrise.”

Hill’s neighbour, Josh Zumstien, said the co-op’s most prized feature is its communal courtyard space. There, his two children, ages six and eight, spend hours playing giddily among other residents their age.

“We are scared. We’re not sure we’ll have a place to live anymore. It’s still up in the air and the city isn’t telling us anything,” Zumstien said.

Although the millions of dollars of proposed development make room for tens of thousands of new residents, it doesn’t include the construction of new schools, parks and community facilities, pointed out Palmquist, an outspoken critic of the project.

The problem with the project, the Vancouver architect said, comes down to affordability.

“The highrise, high-density model of development does not work. The higher we go up in the air, the more every square metre of lower and upper space costs to build and consume significantly more energy to operate than low and mid-rise alternatives.”

These heightened costs will trickle down to everyday renters, Palmquist said, “condemning generations of Vancouverites to an unaffordable future.”

University of B.C. professor Scot Hein said his first impression of the Broadway Plan was that it resembled “Metrotown stretched out across the Broadway corridor.”

“These are huge towers, bigger than Downtown South,” said the former senior urban designer for the city. “The one at Granville and Broadway has big shadowing implications, particularly across Fairview Slopes.”

Kitsilano resident Bill Tieleman said his teenage daughter would likely be out of her current place along the West Broadway corridor if the costly project goes ahead.

“This is a fight for the soul of Vancouver,” Tieleman said. “We can increase density, gently and with the approval of neighbours and neighbourhoods, without demolishing people’s homes.”

Census data show that for every provincially subsidized affordable housing unit developed in the city between 2015 and 2019, another three affordable units in the $750 to $1,000 per month range were lost as a result of redevelopment.

The reality isn’t lost on Lindsey O’Shea, who is being forced to find a place to live after more than 19 years at Alma Blackwell, a 46-unit social housing complex in Grandview-Woodland.

The Vancouver-born resident would have to pay more than double her current rent of $1,600 a month to live in one of the new units of the six-storey complex that will be built in her 39-year-old building’s place.

“No matter how excellent I am at my two jobs, I will never catch up to this housing market. When I am ‘demo-victed’ I will not be able to afford rent.”

— With files from John Mackie