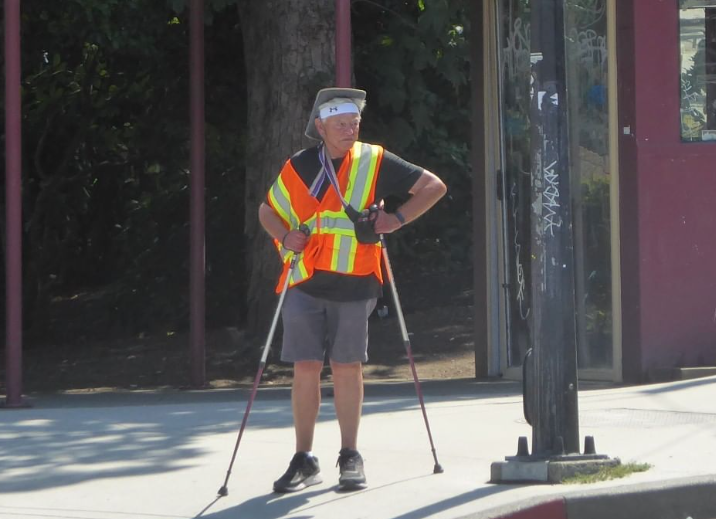 A 79-year-old man has completed a solo walk from Calgary to Vancouver to raise money for cancer research.

Gary Averbach arrived at Jack Poole Plaza in downtown Vancouver on Thursday to a crowd of cheers and applause.

“I did it as part of my bucket list, but I also did it for them,” Averbach said.

The man’s walk was in memory of his cousin, business partner, and friend, Bob Golden, as well as other family members and friends who have passed from cancer.

“This year was supposed to be Vancouver to Calgary but I found out that Calgary is 1,000 metres higher than Vancouver, so I figured I’d save myself some time, so I made it Calgary to Vancouver. But then on his death bed, Bob … took me and he says, ‘I want you to raise money for this cancer, it’s a terrible thing.’ His whole family was there so what do you do when somebody is on their death bed and makes you promise something?” Averback explained.

And so he did, making the 1,100 kilometre trek — dubbed ‘Bob’s Walk for Cancer Research’ — over the course of a few months, leaving Calgary in late June.

“The first day could barely have been better,” a post, dated June 25, on Averbach’s progress page reads.

He initially wanted to raise half a million dollars for the cause. As of Thursday, he had gathered $540,000.

“It feels good. It feels good to be finished. I never doubted I’d finish but it does feel good and it feels good that I’ve raised more than I expected to,” Averbach said upon his arrival to Vancouver.

According to his fundraising page, Averbach was aiming to walk between 25 and 30 kilometres a day.

In the final days of the walk, people checking out Averbach’s progress page may have noticed he didn’t take a direct route to Jack Poole Plaza, instead detouring around parts of the city, including Mount Pleasant.

Averbach says he wanted to “keep my promise to my daughter Shannon that I would not end my trek till she returned from a cruise.”

-With files from OMNI News