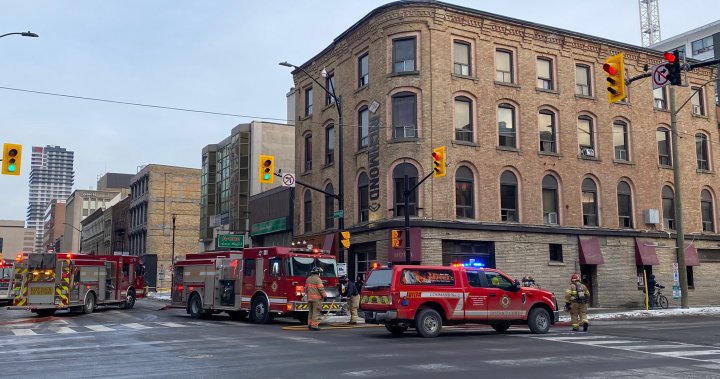 Damage is estimated at $5,000 following the second fire in four months at the building that houses The Richmond Tavern in downtown London, Ont.

Platoon Chief Gary Mosburger with the London Fire Department told Global News that a 911 call came in reporting smoke coming from a wall in the building on Tuesday morning.

Mosburger said crews arrived within four minutes and quickly put out the fire. The fire does not appear suspicious but the exact cause remains under investigation.

“People had evacuated prior to our arrival. Obviously, the quick action by those tenants inside the building was part of the good news story here of being able to contain the fire to a very small area, rather than it going unnoticed and unreported, in a way that was able for us to get to it quickly and put that fire out.”

This is the second fire at the building in the past four months.

Mosburger stressed that he was not involved in the response to the first fire and does not have information on it, but he did say that typically, information is shared within the fire prevention division, which investigates the fires.

“If there is commonalities, then obviously, we work with the building owner to try and rectify those things.”

Damage pegged at $25k after fire above The Richmond Tavern in London, Ont.

On Oct. 5, 2021, firefighters were met by heavy black smoke coming from one of the residences above the bar, but were able to quickly get the blaze under control.

Platoon Chief Colin Shewell praised the quick and organized response of the Richmond Tavern staff, who were able to provide information to firefighters quickly, including that the building was fully evacuated.

Officials said a carelessly discarded cigarette was the likely cause of the fire, which resulted in $25,000 in damages. However, the fire department noted that “the dollars saved by firefighters to this landmark downtown building is priceless.”

According to its website, The Richmond Tavern, known as The Richmond, was built in 1852 and “is one of southern Ontario’s oldest watering holes.”