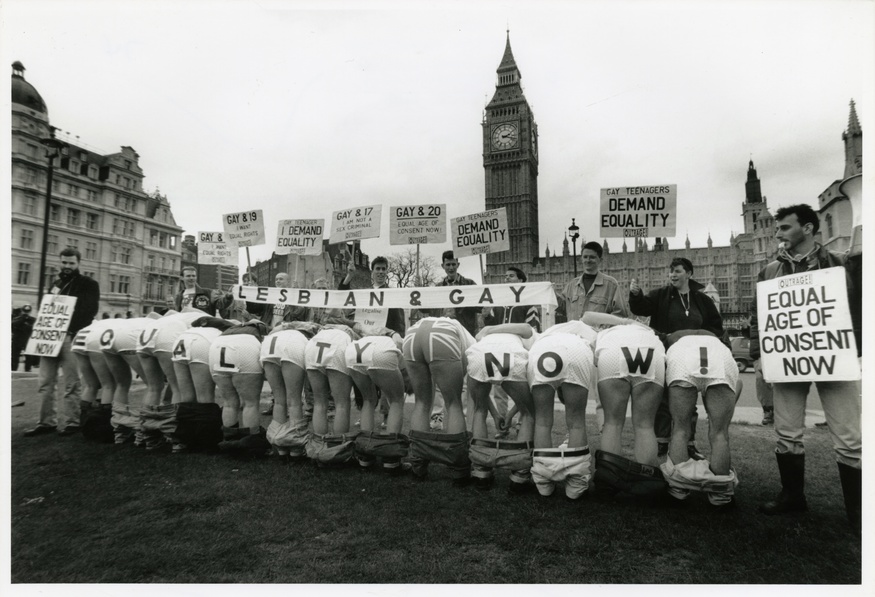 Placards, police truncheons and a, er, penis fly trap puppet feature in an LGBTQ+ exhibition coming to Barbican’s gallery, The Curve, this February.

Out and About!: Archiving LGBTQ+ History at Bishopsgate Institute highlights 40 key moments in queer history — with a focus on the theme of protest.

Among the objects and ephemera are protest banners, used in the campaign against Section 28; a truncheon seized at a demo by Mark Ashton, founder of Lesbians and Gays Support the Miners; a poster promoting the UK’s first national conference of black gay men; and a wealth of badges bearing slogans and movements from ‘Gays Against Nazis’ to ‘Lesbians Ignite’.

Photos include those of young queer people relishing the LGBTQ+ London scene, in spite of a Tory government that was brazenly homophobic. (Then-prime minister Margaret Thatcher said that teaching children about gay culture ‘cheated them of a sound start in life’ — yikes.)

Then there’s the magnificent image of OutRage! members dropping their kecks for a ‘Bend Over For Your Member’ demo outside the Houses of Parliament.

Talks, conversations and films accompany the exhibits, including a screening of the landmark gay sex ed documentary, The Gay Man’s Guide to Safer Sex, followed by a discussion with producer Tony Carne and film curator Selina Robinson (1 March).

The exhibition is free to visit — but it’s only on for three weeks, starting 28 February, so you’ll need to be quick!

Out and About!: Archiving LGBTQ+ history at Bishopsgate Institute, The Curve, Barbican Centre, 28 February- 21 March 2022, free