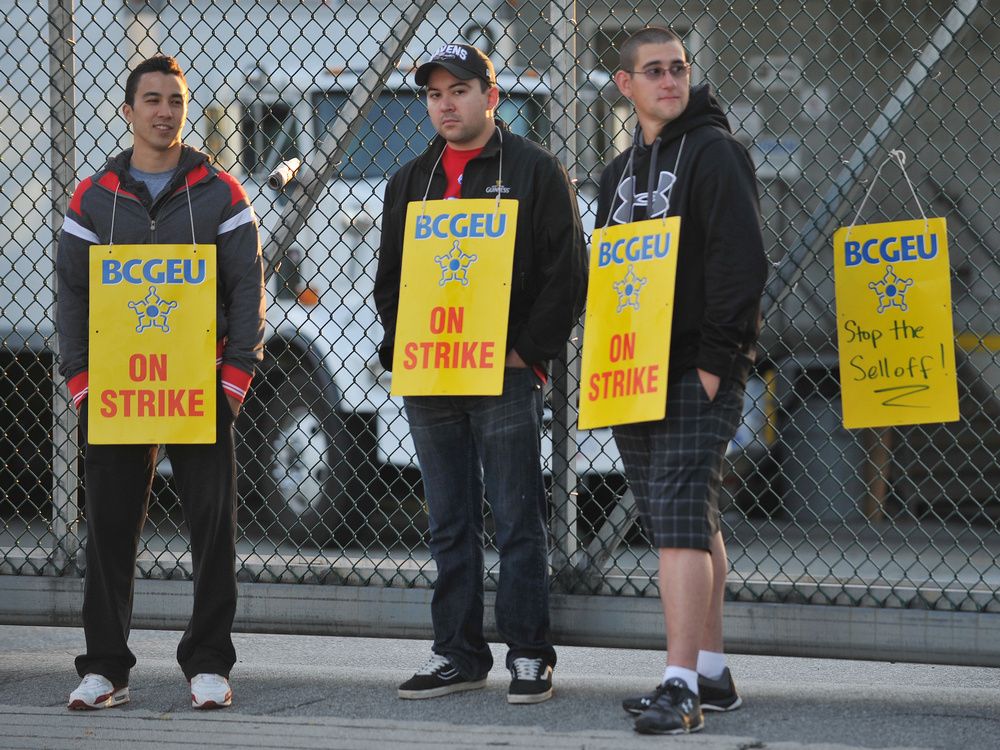 One of B.C.’s biggest unions, representing tens of thousands of government employees, has issued notice that job action could come as early as Monday, with impacts predicted for a host of public services.

Stephanie Smith, president of the B.C. General Employees’ Union says its 33,000 members, including firefighters, correctional officers, administration staff and workers at B.C. liquor and cannabis stores are unwilling to budge on their most-pressing demand.

“We’re asking for wage protections from inflation with a cost of living adjustment clause in a new collective agreement.”

Although Smith acknowledged that “anything could happen in the next 72 hours” before the strike is executed, she hopes the B.C. Public Service Agency will fold under pressure from employees.

“I’m hoping the phone will ring this weekend and they’ll invite us back with a serious offer,” she told Postmedia Saturday.

Tensions between the union and the employer came to a boil at the end of June when members rejected a 9.99 per cent pay increase over the next three years.

“The wage offer was far too low, there was no acknowledgement of cost of living adjustments,” Smith said.

Friday, BCGEU informed workers to “keep an eye on your email for details on targeted sites to be picketed,” in an online bulletin.

In a statement, the B.C. Public Service Agency assured that “while it is uncertain how the union might initiate strike action, critical services will still be available for people” and that it respects employees’ right to strike.

Government workers whose sudden leave from their job would pose a legal and safety risk for the public — including wildland firefighters, and those in courthouses, prisons and child protection services — plan to execute job action in other ways.

“If we strike, these workers could refuse to work overtime hours, only perform the duties outlined in their job contract and be firm about taking their breaks on time,” Smith said.

The last time BCGEU members emerged on the picket lines was close to a decade ago, when 1,785 B.C. government work sites in 152 communities shut down for a workday on Sept. 5, 2012 with 27,000 people participating in the daylong lockout.

Although the union was last invited back to the bargaining table for exploratory discussions Friday, Smith said the B.C. Public Service Agency proved stiff in negotiations.

“It’s getting harder and harder for workers to meet the cost of rent and mortgage payments,” she said, noting that the groups have clashed more frequently as wages fail to keep pace with the cost of living.

While public service workers’ last pay increase was two per cent in April of last year, consumer inflation rose by four times as much in June, according to Statistics Canada.

“Workers’ purchasing power has decreased with the cost increase of everything else, especially gas prices. It’s affecting our B.C. communities as less is being spent at smaller businesses now that there is little to no disposable income.”

Starting pay for wildland firefighters is less than $24 an hour. Unlike MLAs, the provincially employed workers’ wages do not fluctuate to accommodate the existing rates of inflation.

“What we’re calling for is not new. Old age pension and other benefits are adjusted based on inflation rates,” Smith said.

An overwhelming majority of union members working in the direct government, close to 95 per cent, voted to strike.