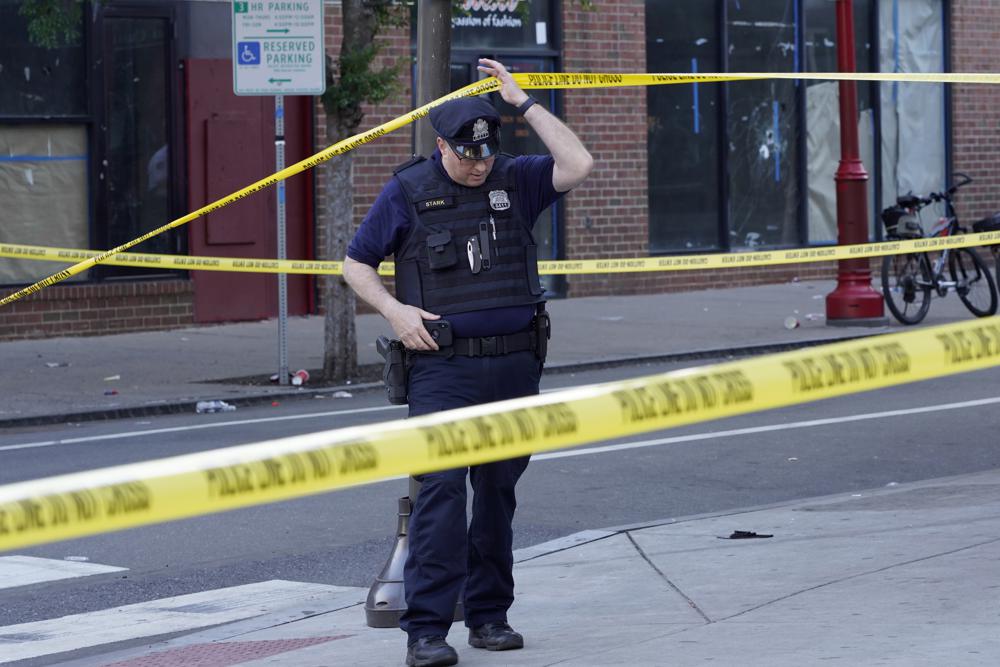 Police officers were patrolling the area on South Street in downtown Philadelphia when they heard multiple gunshots and witnessed several suspects firing into a large crowd just before midnight, Police Inspector D. F. Pace said during a news conference.

An officer shot at one of the suspects from about 30 feet (9 meters) away, but it is unclear if the suspect was hit, Pace said.

“You can imagine there were hundreds of individuals just enjoying South Street, as they do every single weekend, when this shooting broke out,” Pace said.

Two men and a woman were among those killed in the shooting, he said. Their names were not made public by authorities. Thomas Jefferson University Hospital spokesperson Damien Woods said, of the 10 patients who came to the hospital, three were dead, six were in stable condition and one had been discharged.

Pace said police expect to be able to gather “a lot of video surveillance footage” from the many businesses along the street later in the day to try to identify suspects.

“Once again, we see lives senselessly lost and those injured in yet another horrendous, brazen and despicable act of gun violence,” he said in a statement Sunday morning. “My heart is with the family, friends, loved ones of those lost or injured, and with everyone impacted by this terrible tragedy.“

Kenney said the surge in gun violence in the city and across the nation “makes me not just heartbroken, but angry.” He said, however, fighting it would be “an uphill battle” without measures to address the “availability and ease of access to firearms.”

Eric Walsh, closing up the outdoor seating area of a bar along the block, told The Philadelphia Inquirer that the scene was “chaos.” He said he saw a young woman collapse to the ground on the corner.

“People were coming off the street with blood splatters on white sneakers and skinned knees and skinned elbows,” Walsh said. “We literally just were balling up napkins and wetting them and handing them to people.”