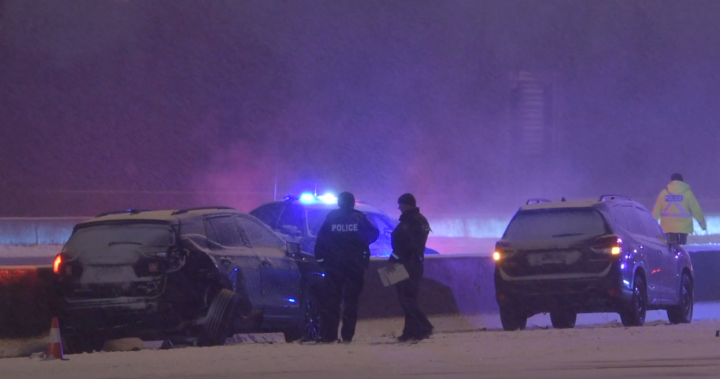 A woman is dead after a multiple vehicle collision on a snowy QEW in east Hamilton, according to Ontario Provincial Police.

Investigators say three vehicles were involved in the incident which initially started as two vehicle crash just before 7 p.m. on the roadway near Centennial Parkway in Stoney Creek.

It’s believed the female driver exited one of vehicles during the first collision to speak to another driver when she was struck by a third car trying to avoid the first smash-up.

“A third vehicle came from behind swerved to avoid that vehicle … essentially blocking a lane … unoccupied with no lights on,” said OPP Sgt. Kerry Schmidt in a social media post.

“That vehicle then swerved to avoid it and sadly struck that pedestrian, killing her.”

All Niagara bound lanes of the QEW approaching Centennial were closed at Nikola Tesla Boulevard just after 8 p.m.

A pair of lanes on the Toronto-bound side were blocked as part of the ongoing investigation by Burlington OPP.

“Snow was coming down. Weather conditions obviously played a factor in this,” Schmidt said.

OPP recommend getting your vehicle to a safe location and staying in it if ever involved in a collision on a major roadway.

“Call 9-1-1 or 5-1-1 if you need a tow truck depending on where you are, do not become a pedestrian on the highway,” said Schmidt.

“Exiting your vehicle makes you vulnerable, and that’s exactly what may have taken place here.”

“Visibility may be suddenly reduced at times … surfaces such as highways, roads, walkways and parking lots may become difficult to navigate due to accumulating snow,” Environment Canada said in its alert.